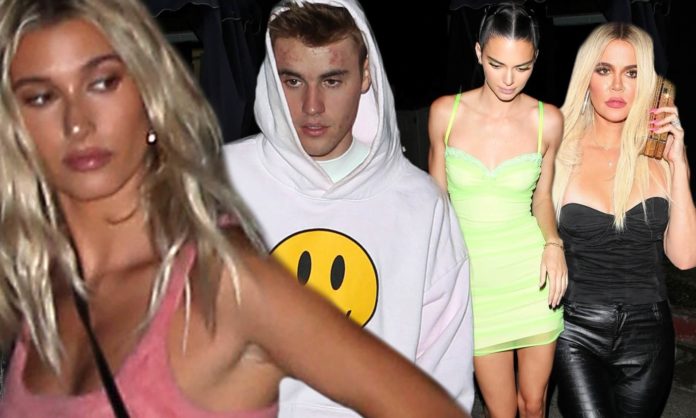 On Friday evening, Justin Bieber Hailey Baldwin, Kendall Jenner, and Khloe Kardashian were spotted together at The Nice Guy.

Kendall Jenner and Khloe Kardashian were dressed up in a glam up look while the Bieber Baldwin couple kept it down for the evening.

Bieber paired his light pink colored sweatshirt with his own company’s logo with loose-fitting light wash jeans. Hailey Baldwin stepped out in a light cuffed jeans and red sneakers. She opted for a feathery pink-colored crop top. She let her hair down in loose free waves.

The glamour sisters got dressed up to garner attention. Kendall Jenner went with a mini dress of neon green color with pointed heels. 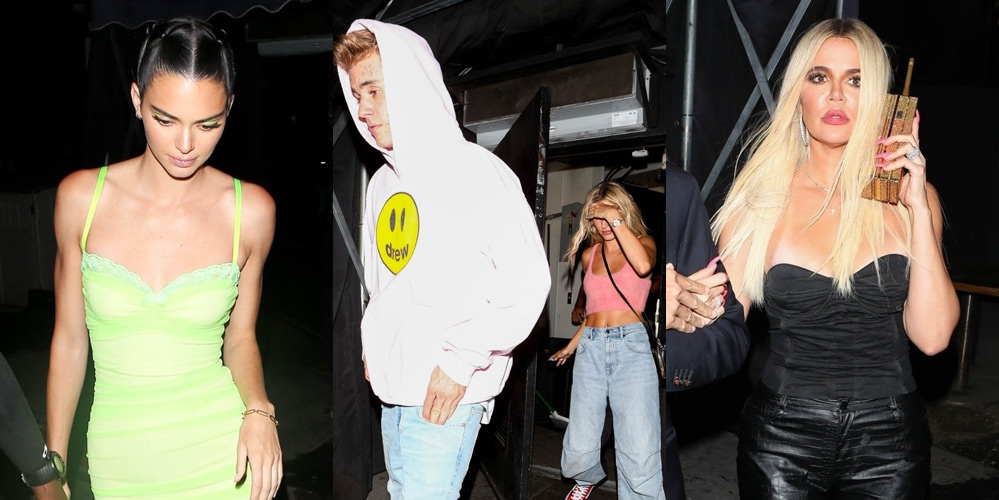 Khloe Kardashian was dressed up in a black leather pant and black bustier tops. However, the catchy attraction was her phone shaped clutch. Justin Bieber couldn’t stop gushing all over it through his Instagram stories.

All four of them came up together to spend the evening celebrating by themselves skipping the night of Kylie’s birthday. All four of them didn’t make it for Kylie’s birthday and they met up at The Nice Guy to enjoy the missed night in Italy. Well, although it’s weird for the two to miss their sister’s birthday bash in Italy they might have their own reasons for skipping the party. Let’s be non-judgmental here for the sisters. Even though the sisters were absent from Kylie’s party, Kylie didn’t seem to let it phase her and she had the night of her life in Italy.

The four celebrities enjoyed the night really amazing. When they walked out of their venue, The Nice Guy, in West Hollywood, Justin Bieber emerged as the first. He looked very tired and worn out from partying too hard. Looked like, the four celebrities had a night well spent partying.